The David Byrne concert in Boston on Tuesday night was as great or greater than any fan (and I am a big fan) would expect. But another great thing about the concert was being exposed to the music of Benjamin Clementine, who opened up for Byrne.

A Reuters study in 2016 found that at least 144,000 people were removed from the voting rolls in recent years in Ohio’s three largest counties, which are home to Cleveland, Cincinnati and Columbus.

“Voters have been struck from the rolls in Democratic-leaning neighborhoods at roughly twice the rate as in Republican neighborhoods,” the study found. “Neighborhoods that have a high proportion of poor, African-American residents are hit the hardest.”...

The Justice Department for decades took the position that failing to vote should not lead to disenfranchisement....

After the last presidential election, the department switched sides in the case, Husted v. A. Philip Randolph Institute, No. 16-980.

I had the honor of speaking in March at the Charles Hamilton Houston Institute for Race and Justice on the police killings of Army Cpl. Roman Ducksworth, Jr. in 1962 and Michael Brown, Jr. in 2014. The video of the talk is now online. 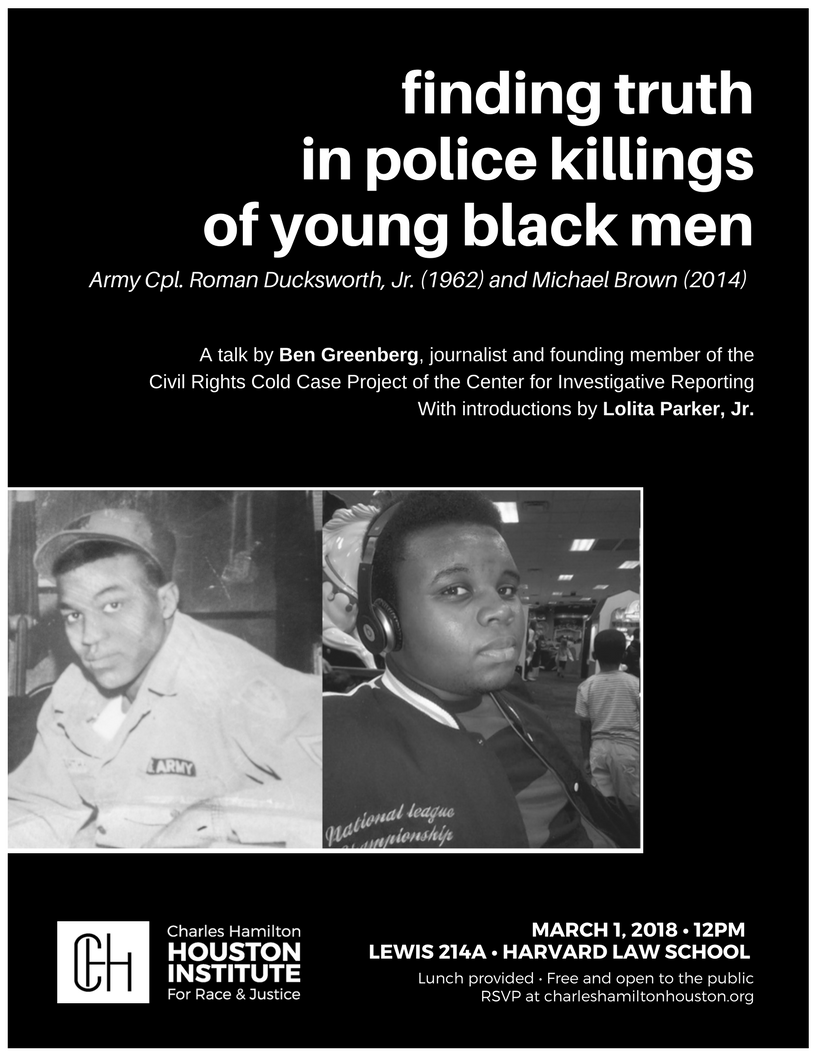 The law provides for a "Privacy Advisory Commission" and directs police to produce an annual report with fine-grained details of how surveillance technology was used. The Privacy Advisory Commission must be notified any time the city and its police seek funding or appropriations to procure any new surveillance technology. The city is also barred from entering into nondisclosure agreements with surveillance technology providers that would impair this transparency -- a key provision, doubtless inspired by the Harris Corporation's practice of binding police departments to secrecy over its Stingray cellphone spying devices, a bizarre attempt to thwart transparency that culminated with Federal agents raiding local police departments to seize evidence before it could be introduced in open court, which would have revealed the existence and characteristics of Stingray devices.

Now, prisoners instead will have to submit a request to purchase books — a limit of five per order — through an ordering system in which they must pay exorbitant prices and don’t have the option to buy cheaper used paperbacks. In addition, prisoners must pay a 30 percent tax plus shipping cost, according to prisoners and memos distributed in at least three BOP facilities. Under the new protocol, a book purchased from Amazon for as little as $11.76, with shipping included, could cost more than $26....

“An inmate’s contact list may not possess another inmate’s immediate family member, friend, or contact located on the inmate’s approved list,”... adding it will make exceptions for “attorneys, clerks of the court, and other contacts approved on a case-by-case basis.”...

Advocates say that the rule will cut off prisoners from communicating with advocates, pen pals, family members, friends, and journalists who are in touch with multiple prisoners in one facility.

“This will prevent us from assisting prisoners or learning about the very abuses we are discussing now,” Povah said. “It’s as if they want to cut prisoners off from the outside world altogether.”