Red White and Black and Blue 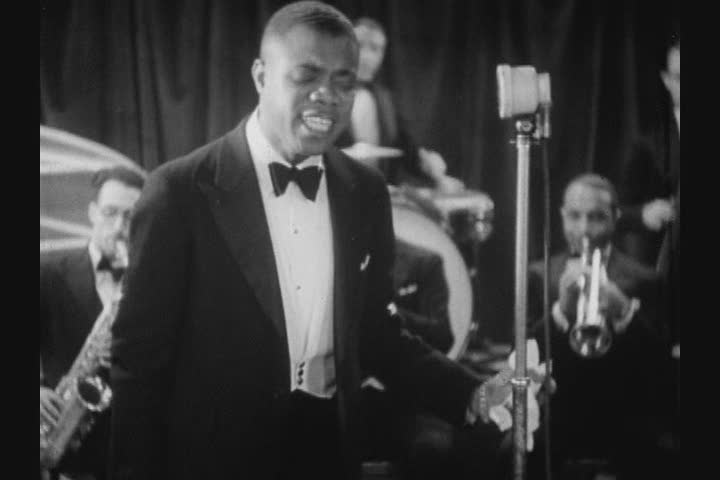 Still from 1933 film of Louis Armstrong in Copenhagen, Denmark.

Now I have one radio-phonograph; I plan to have five. There is a certain acoustical deadness in my hole, and when I have music I want to feel its vibration, not only with my ear but with my whole body. I’d like to hear five recordings of Louis Armstrong playing and singing “What Did I Do to Be so Black and Blue”—all at the same time. Sometimes now I listen to Louis while I have my favorite desert of vanilla ice cream and sloe gin. I pour the red liquid over the white mound, watching it glisten and the vapor rising as Louis bends that military instrument into a beam of lyrical sound. Perhaps I like Louis Armstrong because he made poetry out of being invisible. I think it must be because he’s unaware that he is invisible. And my own grasp of invisibility aids me to understand his music. Once when I asked for a cigarette, some jokers gave me a reefer, which I lighted when I got home and sat listening to my phonograph. It was a strange evening. Invisibility, let me explain, gives one a slightly different sense of time, you’re never quite on the beat. Sometimes you’re ahead and sometimes you’re behind. Instead of the swift and imperceptible flowing of time, you are aware of its nodes, those points where time stands still or from which it leaps ahead. And you slip into the breaks and look around. That’s what you hear vaguely in Louis’ music. (Ralph Ellison, Invisible Man)

Louis Armstrong always said he was born this day, so I like to take the 4th as a day to honor him.

My love of Louis’ music is something I inherited from my dad.

There was an AM station in Albany, New York that played the jazz of the 20s, 30s and 40s that Dad grew up on. When I was a kid and we went places in the car, I usually took control of the radio to hear the classic rock or top 40 stations. But sometimes Dad would have us listen to the jazz station.

It all sounded the same to me then, but he’d call out the artists and song titles as soon as a song came on, and then he’d start telling me about who the drummer was or the clarinet or trumpet or bass player. I couldn’t keep straight who any of them were, but the names became familiar, Cozy Cole, Fats Waller, Sara Vaughn, Pee Wee Russell, Coleman Hawkins, Ella Fitzgerald, Bix Beiderbecke , Billie Holiday …

Later on, in my mid-twenties, when I was a little more open to learning about some of the things that were important to Dad, he would occasionally buy me jazz recordings whose greatness he wanted me know. We’d be out somewhere, and I’d lobby to stop in at a record store. I’d head off to the rock titles and he’d browse the jazz. And then he’d be at my elbow, holding Miles’ “Sketches of Spain.” Did I know about this one? Would I like to have it? Um, sure Dad . . . Or the Billie Holiday Commodore Master Takes or The Benny Goodman Sextet, featuring Charlie Christian or Lionel Hampton’s small group recordings.

Now to my dad, just the fact that Satchmo Armstrong made an album interpreting his favorite titles by one of the other great jazz virtuosos from his generation, Fats Waller, was enough for this to be a momentous event in my musical education. Even then, the clear highlight of this, to me, uneven record was Louis’ performance of “(What Did I Do To Be So) Black and Blue.”

Not much more to say about it than Ellison did. Sloe gin over vanilla ice cream. Sloe gin, that liqueur made from blackthorn plums—a densely spiny shrub with succulent fruit far too bitter for human consumption, except as flavoring. The 1955 recording is emotional and elegant, a glistening timeless object with vapor ever rising off its surfaces.

I’ve since learned to like even better Armstrong’s 1929 recording of “Black and Blue,” which must be the one Ellison was writing about in Invisible Man, since the novel was published in 1952, before Satch Plays Fats. 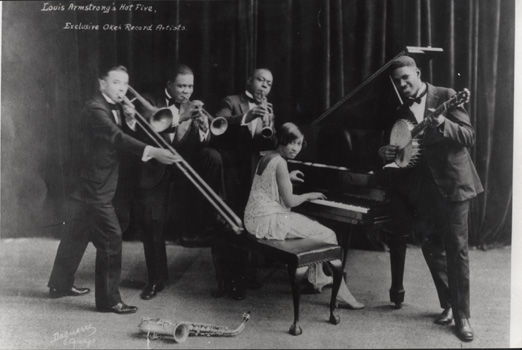 Louis Armstrong and his Hot Five

With its tinkly piano and a band nowhere near the caliber of Armstrong’s later All-Stars, the earlier version of the song sounds dated, the performance slightly mechanical and melodramatic, the swing less pronounced. But against that unremarkable backdrop, comes Louis’ voice—his breath pushing through the words while he bites off the ends of phrases.

Louis stylizes this sound in the 1930s, his voice giving melodrama and camp a brooding edge and energy uncontainable.

(This post has been adapted from a longer post about my father and his musical heroes, written on my earlier blog, Hungry Blues.)

The Pain Of Police Killings Can Last Decades I have a piece over at NPR Code Switch today, about the 1962 police slaying of black Army Cpl. Roman Ducksworth, Jr. in Taylorsville, Miss. My