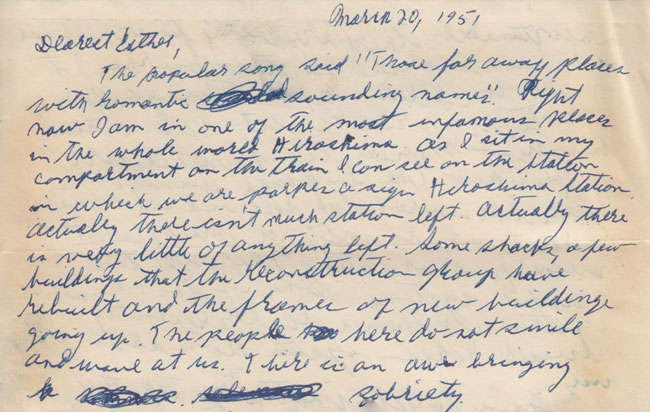 The popular song said “Those far away places with romantic sounding names.” Right now I am in one of the most infamous places in the whole world Hiroshima. As I sit in my compartment on the train I can see on the station in which we are parked a sign Hiroshima Station. Actually there isn’t much station left. Actually there is very little of anything left. Some shacks, a few buildings that the reconstruction group have rebuilt and the frames of new buildings going up. The people here do not smile and wave at us. There is an awe bringing sobriety.

I am studying the Korean language. A few of us with high IQs were given books on how to learn the basic phraseology of the Korean language. Unfortunately there are very few personal phrases included in the course. It is all so called useful things like directions, orders ect [sic]. I am struck by how similar the phonetics are to Hebrew. The language sounds very much like what the individual words indicate. For instance muyylegut [meoggi, 먹기] means “food” or eating. There are two number systems. One is the Chinese system and then a fairly recently devised Korean system. Both are in use.

Honey I Am Really Scared this Time In this letter, we return to Sasebo, Japan in September of 1951, where my father was recovering from a massive case of dysentery. He is about to be

More Interesting than the Sergeant Realizes This letter is quite a glimpse into the complexities of my father’s wartime experience. It is reassuring and moving to witness his horror at the
benlog