More Interesting than the Sergeant Realizes

This letter is quite a glimpse into the complexities of my father’s wartime experience. It is reassuring and moving to witness his horror at the eviction of a Korean family from their home so that it can be turned over to his troop as a place to stay. I like how he uses his discomfiting access to the evicted family’s home to try to restore some measure of their humanity and to see the cultural richness and poltical nuance in their lives. And yet he cannot entirely escape his own position as a western, military invader. Why did he think it okay to tear off the piece of a picture from the wal of the evicted family’s home? Why is it okay for him to send it home to my mother? Sixty-three years later, I have found this nameless Korean family’s peace dove, still folded into the pages of the letter. It is a remarkable artifiact. I should not possess it.

We finally got clear roads and came through to here. We are living in a house that the Korean dwellers were evicted [from]. It is sort of horrible. We pull up in a truck. The sergeant says wait a minute, takes a South Korean soldier and after a few minutes we march in while some poor Korean Family is moving its valuables into a neighbor’s house. This family is more interesting than the sergeant realizes. Note the picture I tore off a picture that was glued on the wall. 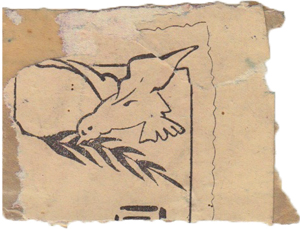 The house is poor one of the sort you see all over the country side. A fence surrounds a small area of land. Within the fence are several rooms and a platform. The middle is bare earth and bare sky. Along the ceiling is an ingenious method for storage space. Sliding panels open and serve as drawers and closets. One room has a fire hearth with three holes each big enough to hold a different size crockery bowel for cooking. On each side of the 4 sides is an exit. These people have a box of Chinese phonograph records. They look terribly interesting. I wish there was a vic here and also I wish I could read Chinese. Seoul is really a rubble. Very few buildings are standing. Those that are standing are smashed up inside. The city is overrun with Americans, British, Turkish, and South Korean soldiers. It seems the civilians there are all there for the purpose of selling to soldiers: silks, liquor, prostitutes, candy, labor and assorted souvenirs.

One more thing I need honey. I hate to be a pest but I need a metal soap dish and a metal toothbrush case (a toothbrush enclosed). The plastic ones break too easily. I feel terrible when I complain about my physical condition. All these men have been wounded or have things like dysentery or yellow jaundis [sic]. However complain I will until I get out of the Infantry.

I haven’t seen the newspaper in a few days but optimism runs high here. People are betting that this mess will be over in 2 to 3 weeks. I sure hope so. There is a good chance that I will get some of my mail here. That would be the best thing that happened in a long time.

I saw a weather report that said it was still quite cold in New York. By now spring must be there. I bet the park looks beautiful: green and even some flowers showing through. I am afraid that I won’t go much for walking when I get home, not for a while anyway but the idea of a walk in the park with you pleases me.

How Ferguson Showed Us the Truth about Police Artwork by @MollyCrabapple